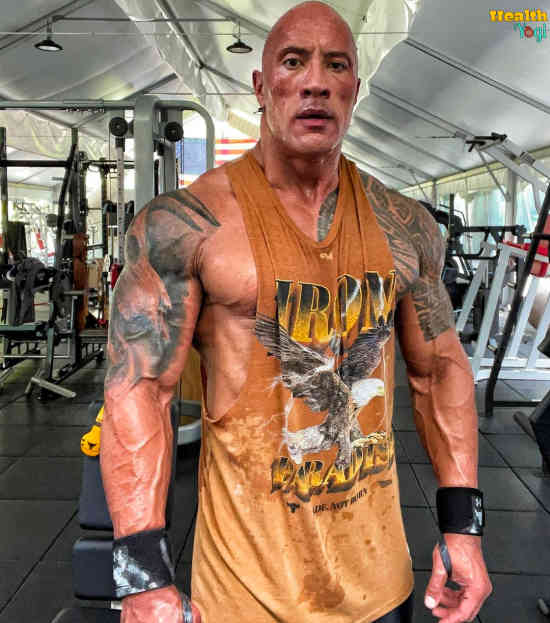 Dwayne Johnson Workout Routine and Diet Plan: Dwayne Johnson is an actor, model, businessman, ex-pro wrestler, and TV personality. He was mostly known for his WWE career, then later getting colossal fame and success in the movies, making him the biggest star.

Dwayne is one of the guys you don’t even want to mess with; that guy is enormous and more significant than our superman Henry Cavill. However, I don’t think they have much difference in physical structure; Dwayne and Henry both look huge as hell. If only Dwayne had hair, maybe we would see him as Superman one day; sorry, Dwayne, I had to do that.

However, we did see Dwayne playing Black Adam. Currently, it’s not out, but the shooting has finished at least; that’s what I heard. In that movie, we will see a new intensity, and Dwayne is doing extra workouts, about which we will talk in a few. It’s not like Dwayne is not the type of person who does not push himself regularly; he does, but it was way too intense for this movie.

So how did Dwayne trained himself and got ready for the role of Black Adam? Well, I saw his Instagram, where I found out that Dwayne is doing many supersets or what he likes to call the giant sets of routines in weight training. He will be focusing on more than two muscles, then one singular muscle. Also, his workout will consist of cardio workouts that will be in the morning and then weight training in the evening or night. 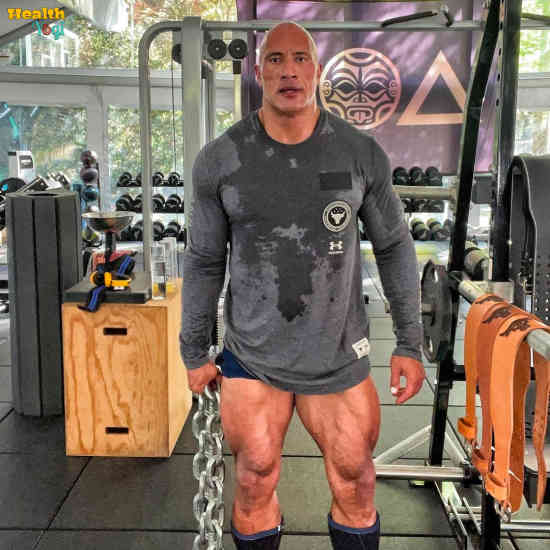 In the morning, Dwayne likes to run outdoors, and that’s how he likes to keep his cardio intact with his regular workout. Later, he also does a few minutes of cardio before his weight training, but that is just a warm-up, so it won’t be intense or complex. In the warm-up, you can do 10 minutes of Stairmaster and get a good workout.

Even though I haven’t seen Dwayne talk about his recent workout and biceps, I know that he does his favorite training of gain sets. It’s doing exercises back to back without or as little rest as he can take.

Dwayne does 4-5 exercises for each part and gets the burn. So this workout will be from my side, remember you need to do three sets of all of these exercises back to back with as little rest as you can.

The way of training is the same for the chest and triceps routine, but this time we will follow the routine that Dwayne Johnson gave himself on his Instagram. You can even see the post by clicking right here.

Triceps (not given by Dwayne Johnson)

Dwayne also gave his Black Adam legs workout, which follows the same way of training as all these workouts. You can watch his legs workout on Instagram by clicking right here.

That’s all for the Dwayne Johnson workout routine.

We need to figure out the diet now that we have cleared the workout part of Dwayne Johnson’s routine. Without a proper diet, there is no Black Adam body for you. So Dwayne does eat a lot of meals every two to three hours.

He needs some protein with also done carbs to fill him up with every meal, and everything that he eats is organic and healthy, well, at least for most of the week. Dwayne is the guy who follows an 80-20 diet plan, which means eating healthy and following a strict diet for 80% of the time, and then for 20%, he lets loose.

So you will see Dwayne eating lots of healthy food six days a week, but when it comes down to Sunday. That’s where Dwayne makes it super easy and eats how he wants. Most of the time, his cheat meals consist of eating a full plate of cookies, his Brand of Tequila, Burgers, Chicken wings, etc.

Healthy food consists of eating chicken, greens, protein shakes, rice, salmon, sometimes steak, etc. If you want to know how Dwayne makes his protein shake, look at this particular recipe by Dwayne Johnson himself, which he shared on his Instagram post.

This shake goes after his workout is done, and then after an hour and a half, Dwayne will be having his dinner. So now, let’s see a diet that I think would be enough to fill up the things that Dwayne Johnson hasn’t explained yet. 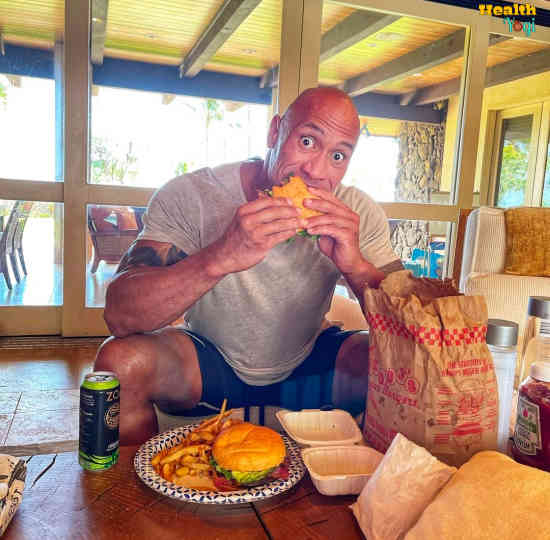 Is Dwayne Johnson a Vegan?

No, Dwayne Johnson is not a vegan or a vegetarian and regularly enjoys eating meat products like chicken, salmon, sushi, etc.

That’s all for the Dwayne Johnson diet plan.