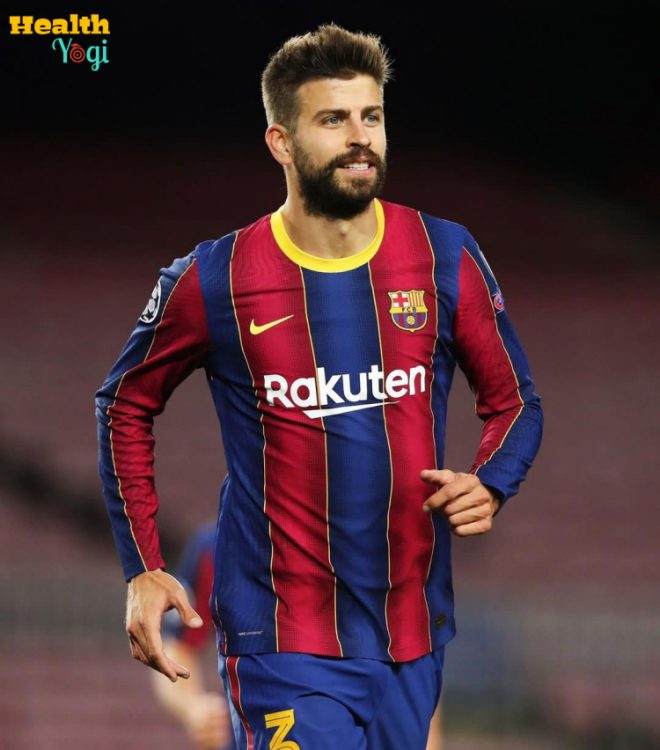 Gerard Pique Workout Routine and Diet Plan: Gerard Pique announced his retirement on Thursday, after a stellar career spanning 14 years with FC Barcelona and in Manchester United before that.

The footballer has had his share of controversy with stint with Shakira and also saw fame through his outstanding performance as a defender. In this post, we will look at his workout and diet routine that marked the energy and stamina we saw on fields.

The footballer undergoes intense training to achieve that level of performance and the 35-year-old is set to play his last game on Saturday against Almeria. 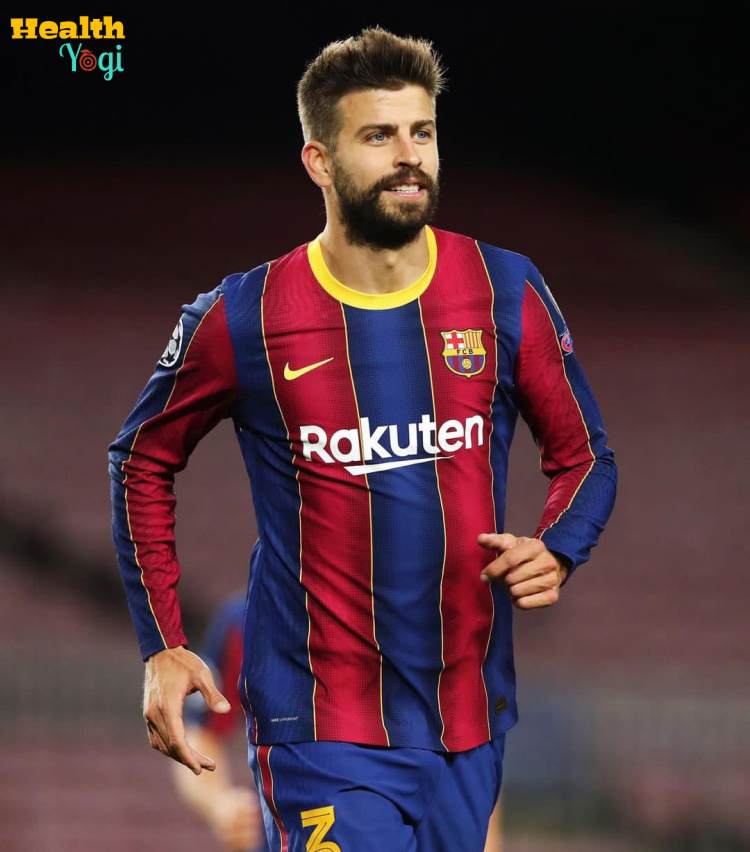 Here’s a look at his body Stats–:

The footballer has a strict schedule when it comes to his diet and lifestyle with clearly defined meal composition and workout styles. His typical workout consists of warm-ups, lots of running, and specific leg exercises.  And that focuses on building stamina and energy on the field.

The player starts his schedule with warm-ups that usually are 25 rounds on the football field. This is then followed by running, jogging and sprints. This helps him on the field in different variations of speed that are required. All focused on increasing his power in the field. He works out for 3-4 hours every day. 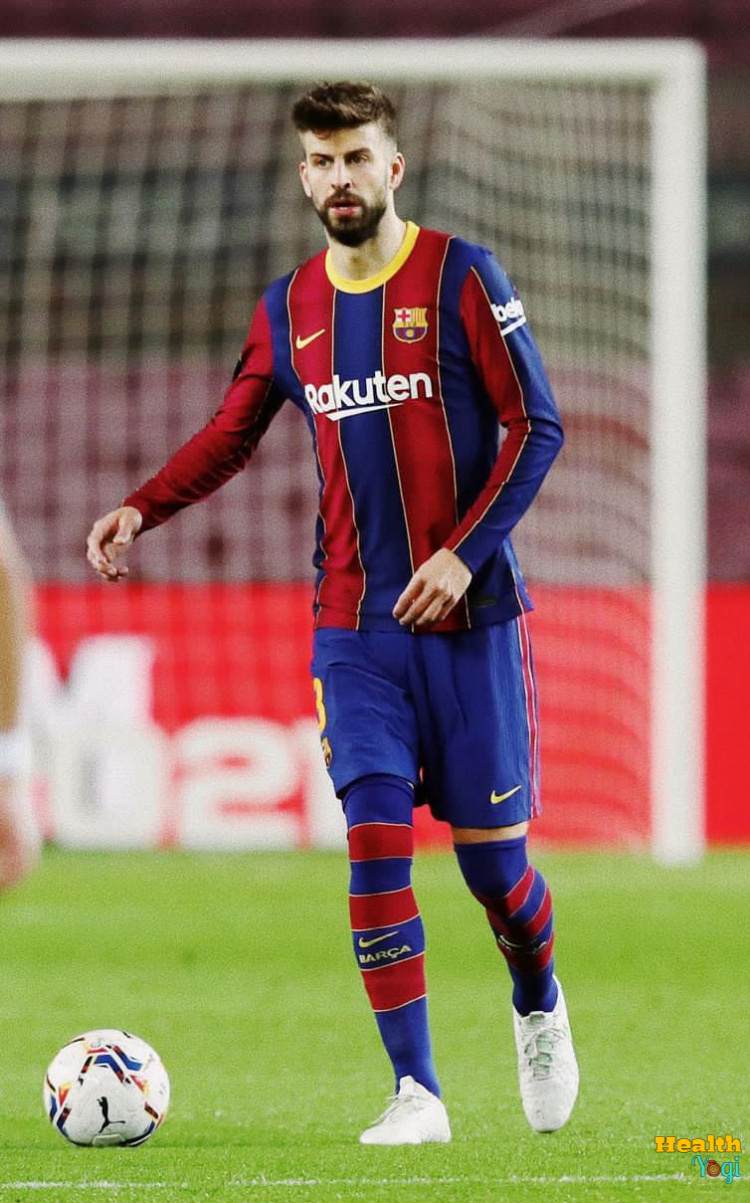 For injury prevention, the footballer does Hamstring curls, side bends, variations of Lunges, Technical Drills, and other such exercises that build the muscles vulnerable to injuries.

Technical Soccer drills are specific exercises designed for footballers to improve their technique and skills in the game. The footballer works specifically on his technique through technical Drills. He performs hurdle and mirror exercises, hurdle top, and other tactical football field exercises.

It has quick cone sessions, cutbacks, and hurdle tops.

The footballer also performs gym exercises like pushups, pull-ups, and deadlifts. It builds strength and prevents injury which promotes agility and power on the field.

Barbell back squats, Dumbbell Lunges, Front Squats, and shoulder presses are some of the most highly recommended gym exercises for footballers.

In a video on a footballer’s workout, by guru sobers, Gerard Pique can be seen training with Romeo Beckham for a session of around 1 hour. 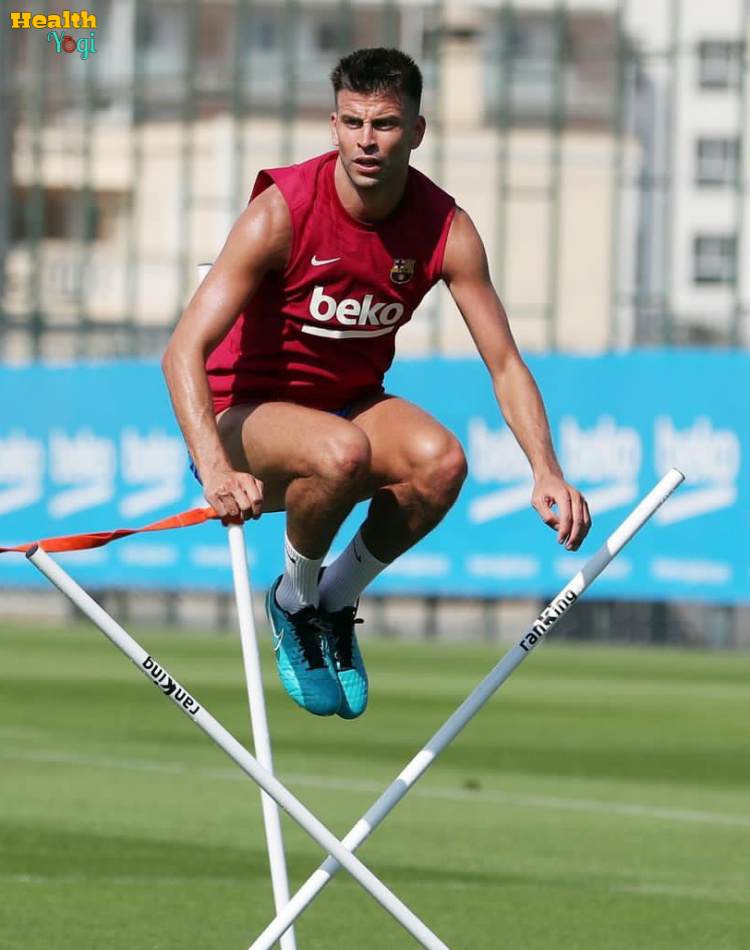 Sand Training is a low-impact resistant

Most of Pique’s technical training is carried out on the sand. Sand Training is pretty common among footballers with a focus on combining it with cone exercises for tactical soccer training.

The main idea is to give maximum resistance and a simulation of high-intensity performance, with a short burst of energy as required for the actual game. This gives impetus to explosive movements required to quickly change directions.

The footballer also does sand climbing and which improves grip and prevents injury.

Medicine Ball to forms a good part of Pique’s workout and in a post, by sport.es this was highlighted. Medicine Ball allows you a range of movements and works like any other fancy exercise with building muscles, agility, balance, speed, and strength. This is especially efficient for injury recovery and adds resistance training to metabolic exercises.

But most importantly it specifically helps with explosive power and balance.

Thus you can also invest in a medicine ball and be consistent to reap the most benefits from an athletic front.

Thus, being a footballer, Pique focuses more on exercises that improve his performance on the field. Nonetheless, we still have some good exercise sets that you can employ in your next workout session. We would suggest you just be consistent and not give up.

Gerard is particularly conscious about his diet too and gives you a peek into his fuel for the day through the many interviews that he has done. With his stint in Barcelona, the player became quite disciplined with his workouts, diet, and exercise. Saturday’s match is going to be his last for the career but Pique promises to return in some other Jersey. 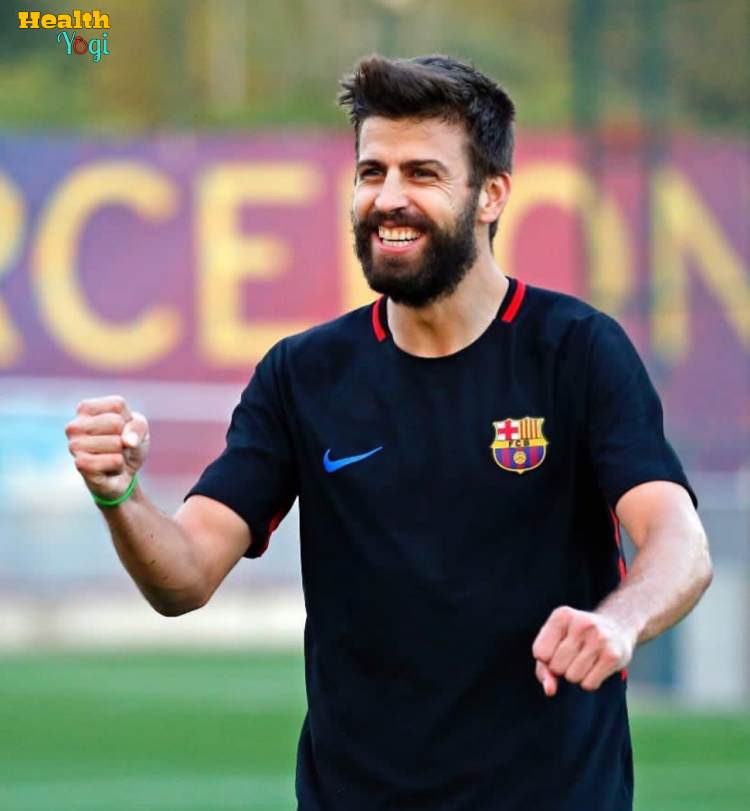 The footballer takes six meals a day which also includes 2 snacks that are usually very healthy options like pasta, bread and fruit.

Though there is no stark consensus about the benefits of 6 small meals a day, several types of research suggest it helps with weight loss and maintenance of blood sugar levels. It works with energy levels too.

Pique’s diets are usually intertwined with good sleep cycles that help in effective recovery and stamina. He focuses more on adequate carbohydrates and proteins as required for his level of physical work.

In case you are still wondering, Gerard is not Vegan.

Pique’s diet is segregated well defined with 15% protein intake, 60% Carbs, and the rest 30% healthy fats. His diets are low fat with olive oil splashed in his salads and a good carbohydrate meal before games.

That’s all for Gerard Pique’s Workout and Diet Plan.

We would recommend you do your own research before subjecting your body to any kind of strict diet plans or workout schedules and only continue if they suit your body type and lifestyle.