While Gon is considered one of the best characters, he’s also the strongest one of them all. His skills even surpass Killua and Hisoka when it comes to strength. So if you also wish to be as strong as Gon or even have some strength like him, keep reading the Gon Freecss workout routine.

Gon is undoubtedly one of the best characters, and his simple-minded behavior makes him more of a threat. With skills developed to kill and help others are pretty amazing. He got his natural ability and strength by doing a lot of free running and being in the wild of his town, where he catches a giant monster and stays in top condition.

Now, I won’t tell you to do that, lol, so don’t worry. Other than that, Gon also trains a lot with Killua and his teacher that you should find. In the series, Gon becomes even more powerful, powerful enough to kill the King and even the Chairman by surpassing his aura and giving away his life. However, all of that happens because of Gon will power and life energy.

Lastly, don’t forget the endless stamina and the martial arts that he does know. So it’s an overall combination. If I would have to guess the actual life ability of Gon, then it would be a free runner that knows martial arts and loves to meditate daily. All of that would make sense with his simple mind, brute strength, fast reflex, and aesthetic body built. So that’s how we will carry on the workout.

In this routine we will train six days a week, it will involve many exercises and different stuff. However, I can guarantee you won’t need to go to the gym. First of all, if you are indeed teenagers that are less than 16 years old.

Then do half of the duration of whatever workouts I will provide. It won’t include a gym, but it won’t be easy, so if you can’t, then don’t do all of them at once. It’s okay to take your time and have fun while learning these activities. So now, let’s start the Gon Freecss workout. 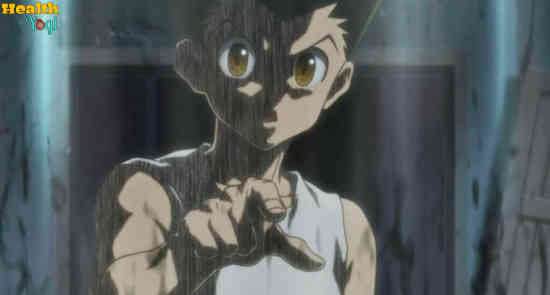 To train your body to become like Gon is by doing free running as we saw in anime how Gon was born in a village where he trains by going to the forest, climbing trees and hunting animals, and fishing.

That’s why it’s best to do the free-running so you can get used to using nature to your advantage. Start with an hour of free-running every day; you can go to a nearby free-running park or even watch videos to learn new moves and how to get started.

The next activity that will help us get the body balance and keep us moving and increase the strength and stamina is Calisthenics.

Without using equipment, you get a workout that is harder than gym weight training. Plus, it helps you gain muscles and immense strength and control over your body. So do an hour of Calisthenics to keep your body fit and healthy.

The last two things that every character of Hunter X Hunter does is mediation and Martial Arts. It’s important as the concept of zen, ren, and nen is not just a theory or something that gets showed as fictional. It’s a reality that many Shaolin monks have proven and other people from the world and regular hours of mediation.

You use your life energy and learn to control it according to your will. Yes, it’s close to impossible, and you need to dedicate your life. However, you can still do 30 minutes to 60 minutes of mediation and gain some benefits. It will help you balance your inner peace and give you a better understanding of life and your body.

Lastly, one hour to two hours of martial arts training is required to gain all the Gon’s abilities. It’s not easy to be a teenager who can beat almost every person, so you need to train hard. I would recommend keeping it three days to five days a week for martial arts training.

That’s all for the Gon Freecss workout routine.