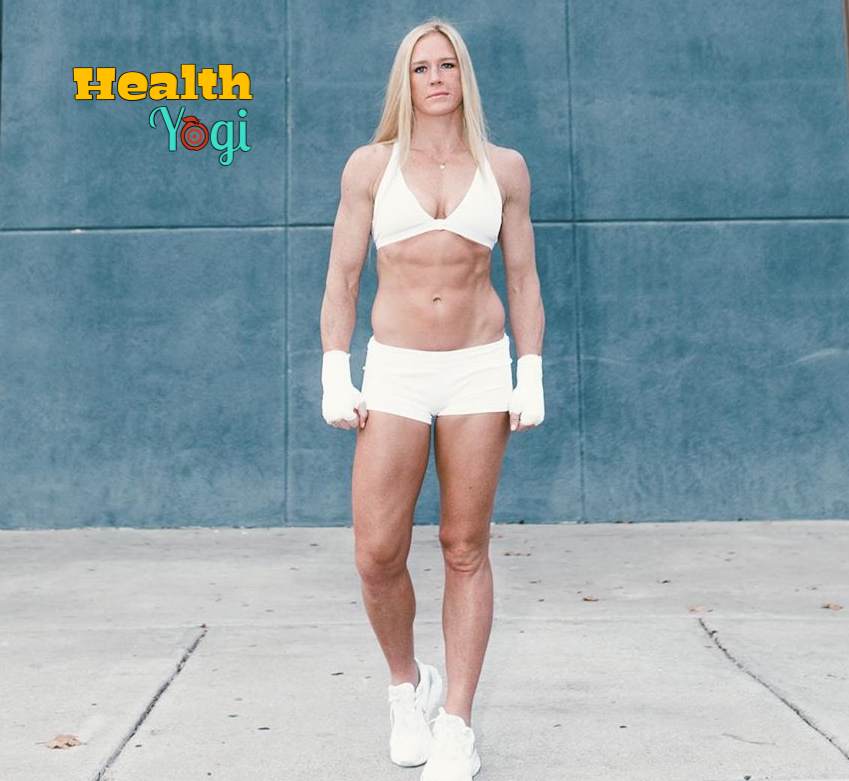 Holly Holm Workout Routine and Diet Plan: Holly Holm is an American mixed martial arts fighter and currently fighting in the UFC league. She is also a former women’s champion, and before getting into the UFC she used to be a pro boxer and kickboxer. Currently, she’s going trending with the intense workout and all of the things that she does. Holly Holm Workout and Holly Holm Diet made her champion.

You may have seen her posting daily workouts and a glimpse of her training routine on her social media accounts. We all know how dangerous she gets in the ring and how aggressive she is so let’s see what exactly she does and she eats for the UFC league.

Holly Holm workout routine consists of a lot of different things from martial arts training to wrestling, learning Jiu-Jitsu and doing cardio weight training as well. She does a lot and trains for at least 4 to 5 hours every day. She trains 5 days a week and rests on Sunday to let the body recover from the intense workout she did. 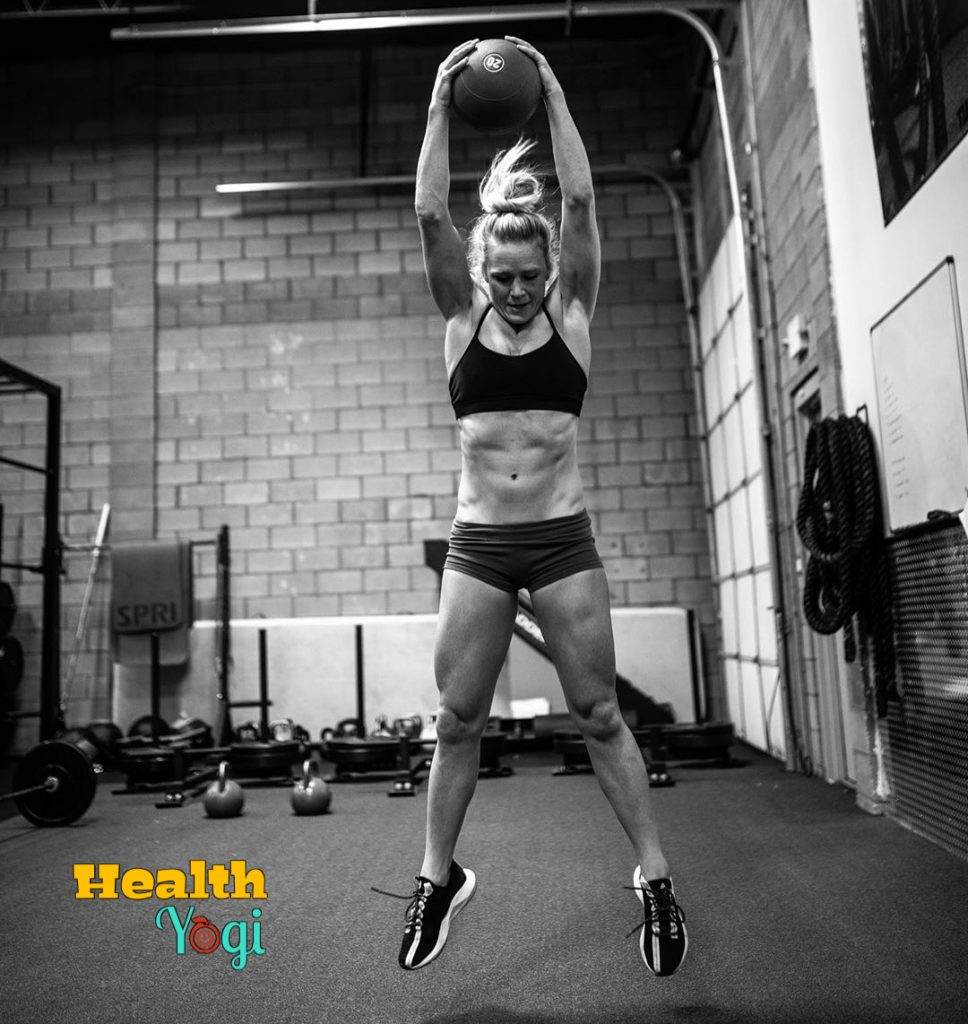 Now while running long distances Holly Holm doesn’t really care if she is going super fast or not as she isn’t trying to be a runner her aim is to lose the extra weight and gain stamina.

While on sprint she does go real hard, in one of her interviews she even said that when she’s sprinting she gives it all she has in every sprint she does. Also, I have mentioned she workout 5 times a week as Saturday is the only running day and no other workout is done on Saturday at all.

Holly Holm does some weight training as well, but most of the weight training focuses on her chest, back, and lower body only. She doesn’t really work a lot for arms in the weight lifting session as she said that when she is training her Isla fighting routine the arms are already working a lot.

So Holly Holm only does bodyweight exercises for her arms like push-ups, pull-ups, and these kinds of things. She also likes to do lots of rope climbs and battle ropes workouts which is considered a full-body workout.

Holly Holm’s MMA training is also divided into a few days as there are a lot of other things that she focuses on as well, so Monday and Tuesday she does MMA sparring and on Thursday she does some real MMA fighting. 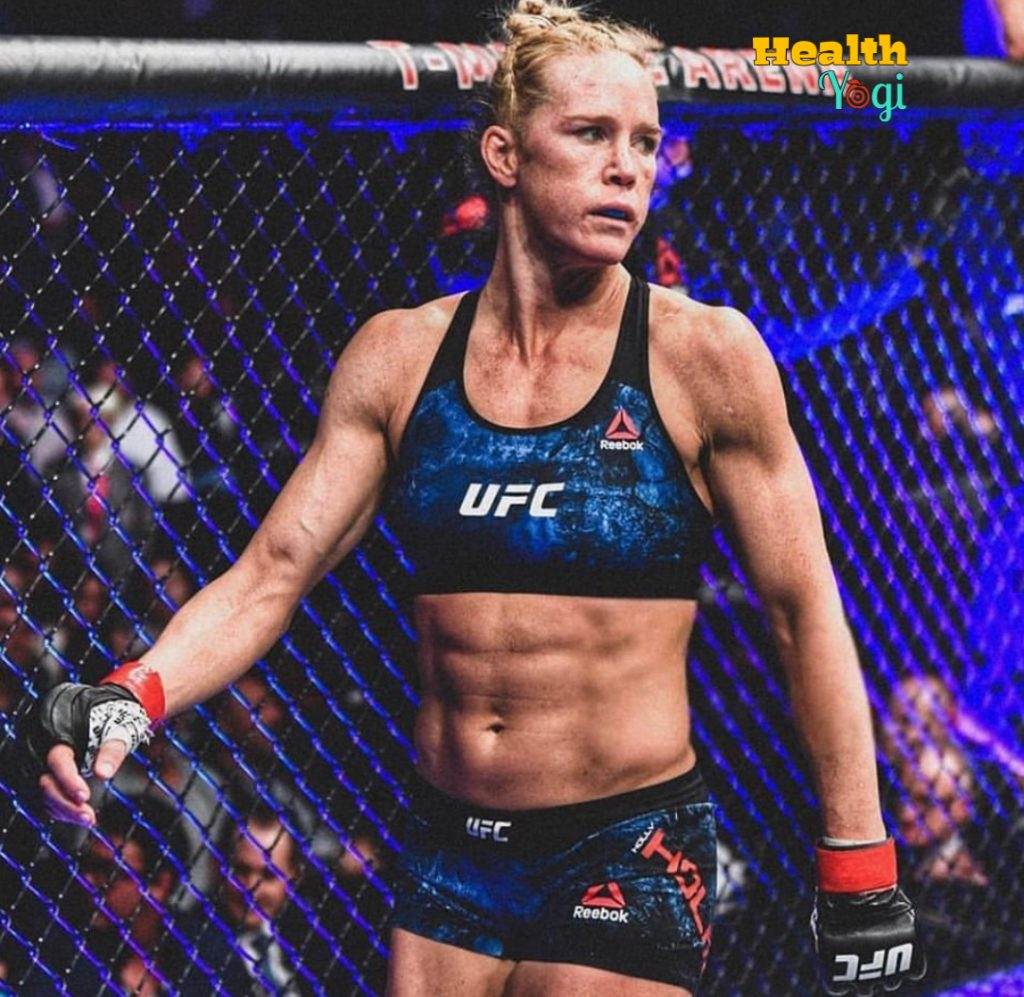 More about Holly Holm’s exercise routine, Another part of her daily training is her Jiu-jitsu training and wrestling training, she does wrestling on Wednesday and Friday in the morning. Then later at night, she keeps on switching to wrestling and Jiu-jitsu from Monday to Friday. So she does like 2 hours to 3 hours of training in the morning and at night or evening, she again trains for 2 hours or 3 hours 5 times a day.

This is all about Holly Holm’s workout routine. 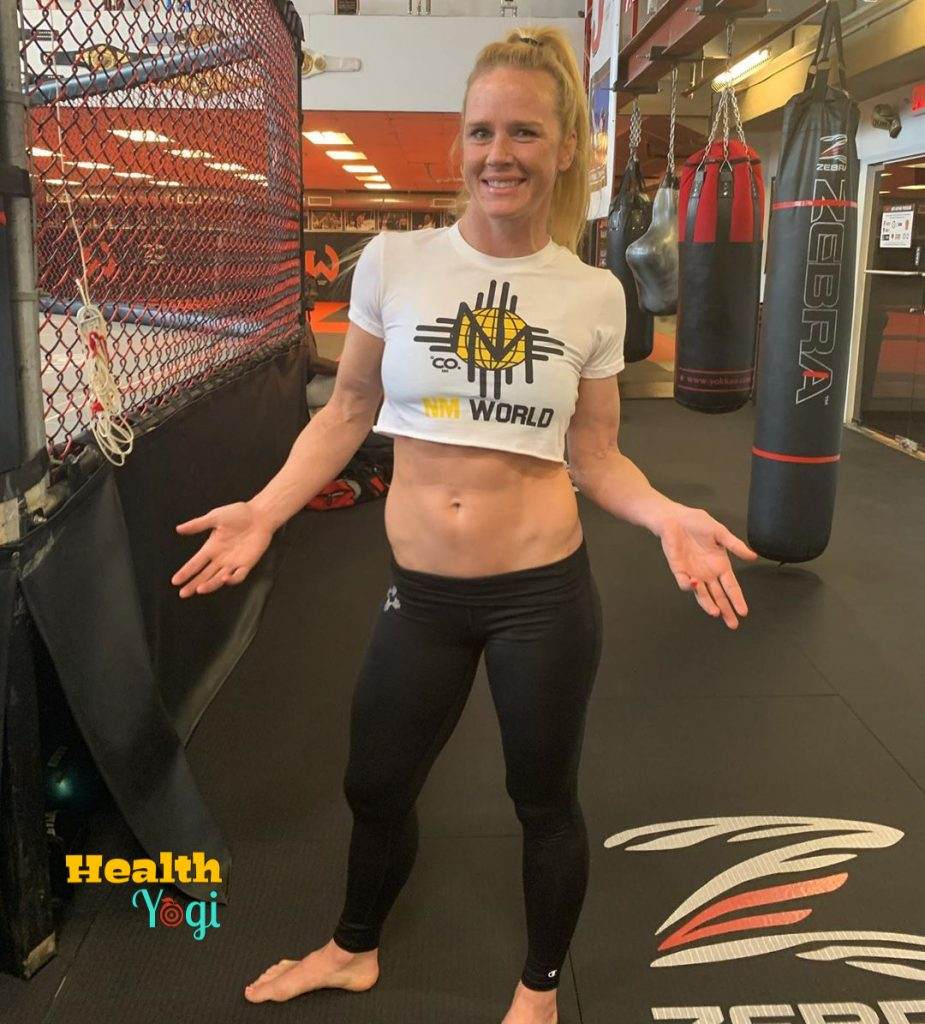 The diet plan of Holly Holm is based on a balanced diet, containing even amounts of nutrients, vitamins, whole grains, good fats, carbs, and proteins. Also, she needs to drink more than a gallon of water to maintain her body temperature and to keep her hydrated as well for the day. She eats 4 to 5 meals a day containing food like oats, salad, chicken, veggies. 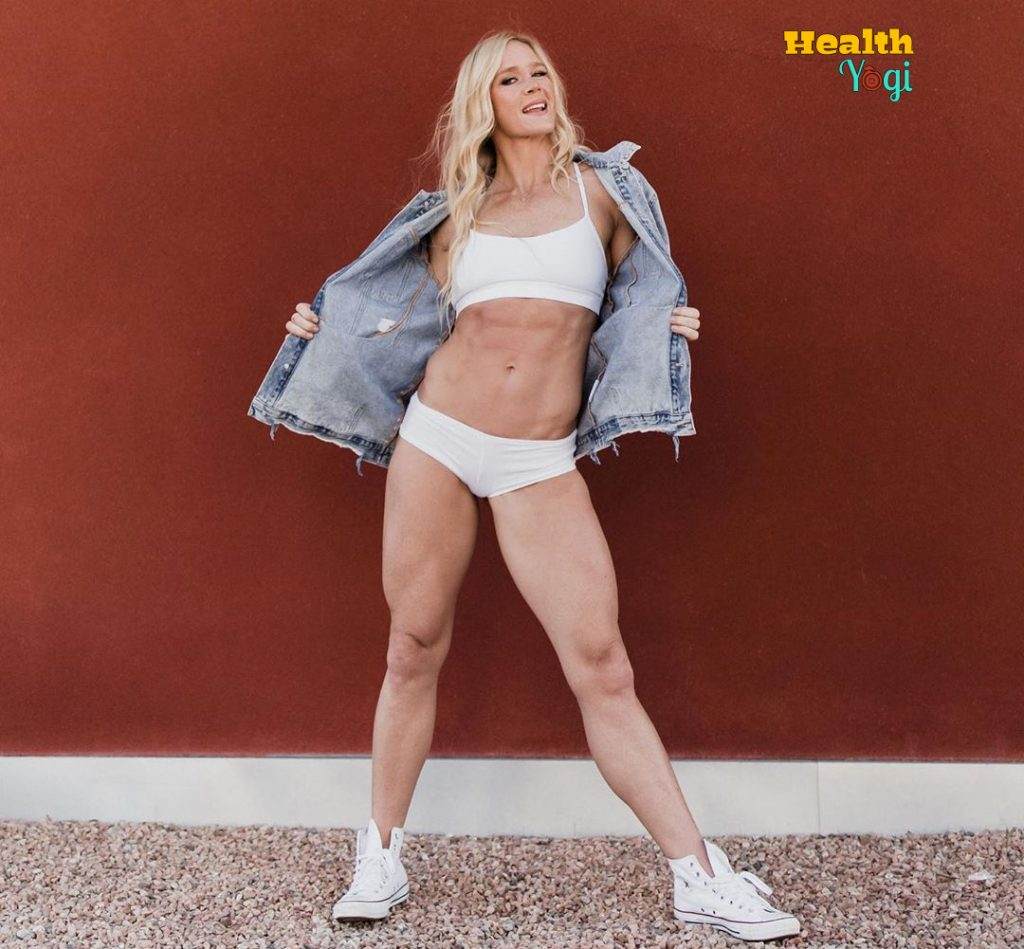 Here is meal in Holly Holm diet for dinner,

This is all about Holly Holm meal plan. 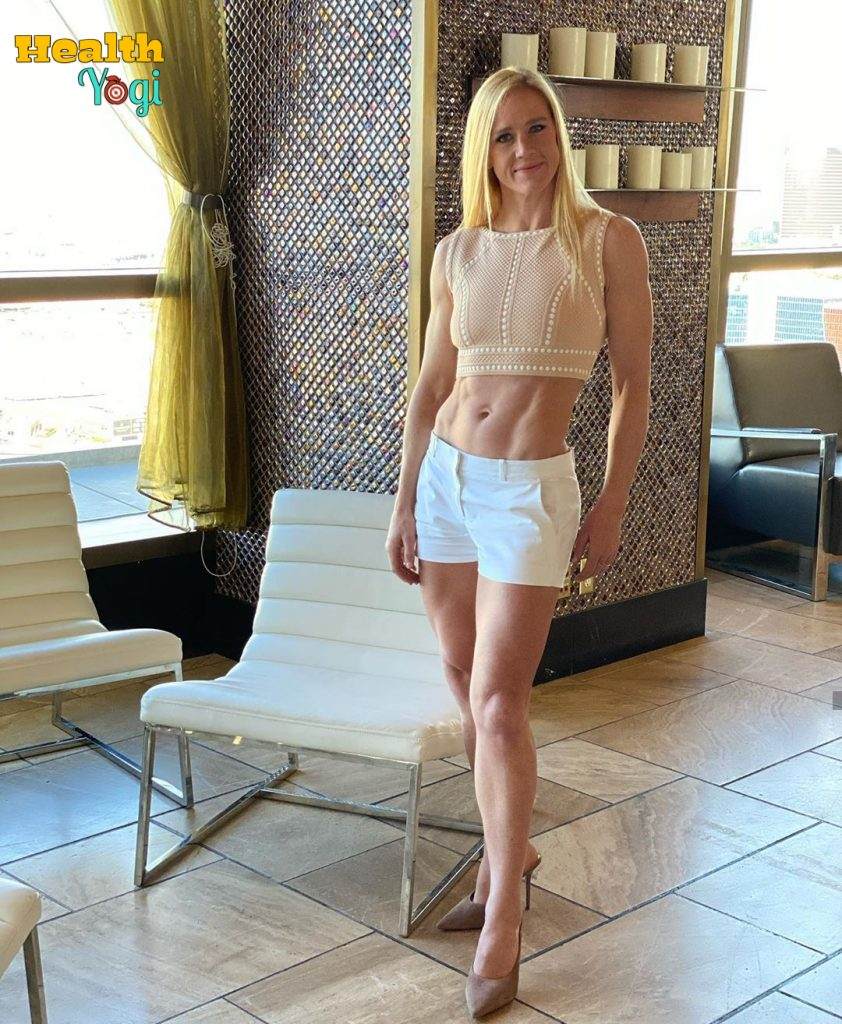