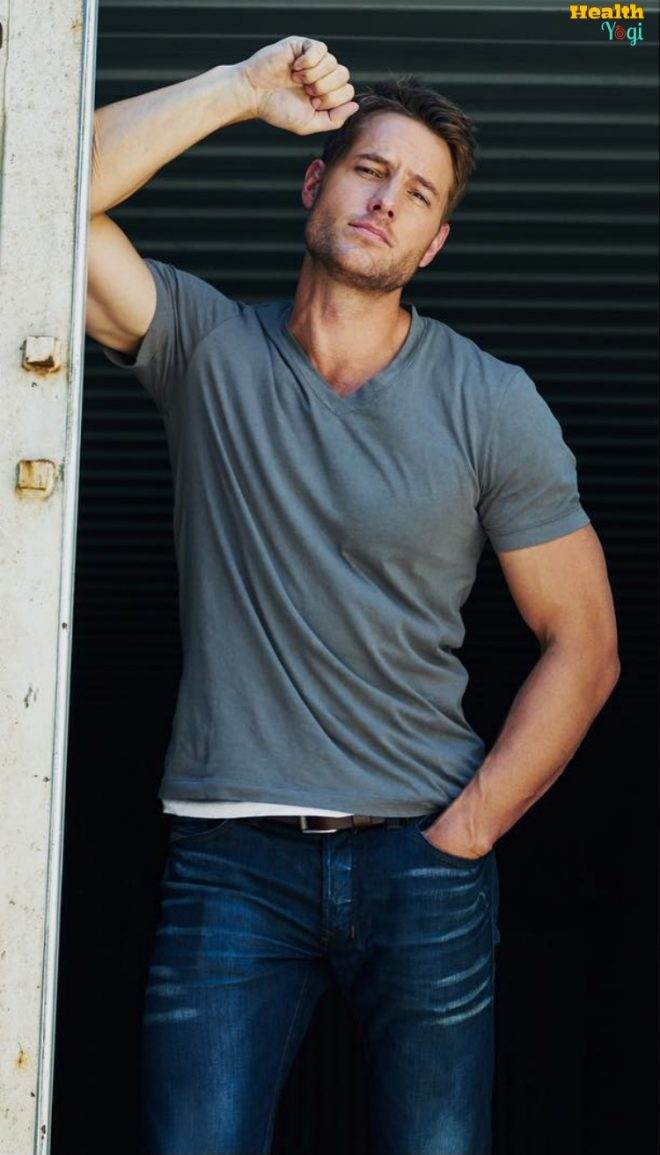 Justin Hartley Workout Routine and Diet Plan: ‘This is Us star Justin Hartley just dropped the trailer of his next project called ‘ The Noel Diary’, officially set to release on 24th November on Netflix. The show seems to be really interesting and sweet with great performances by both the leads.

Justin Hartley easily qualified as the ideal female interest in this show, though he isn’t any less in real life too. In this post, we will look at his Workout Routine which gives him a stellar physique at that age, and his diet tips which properly substantiate his sweating in the gym. 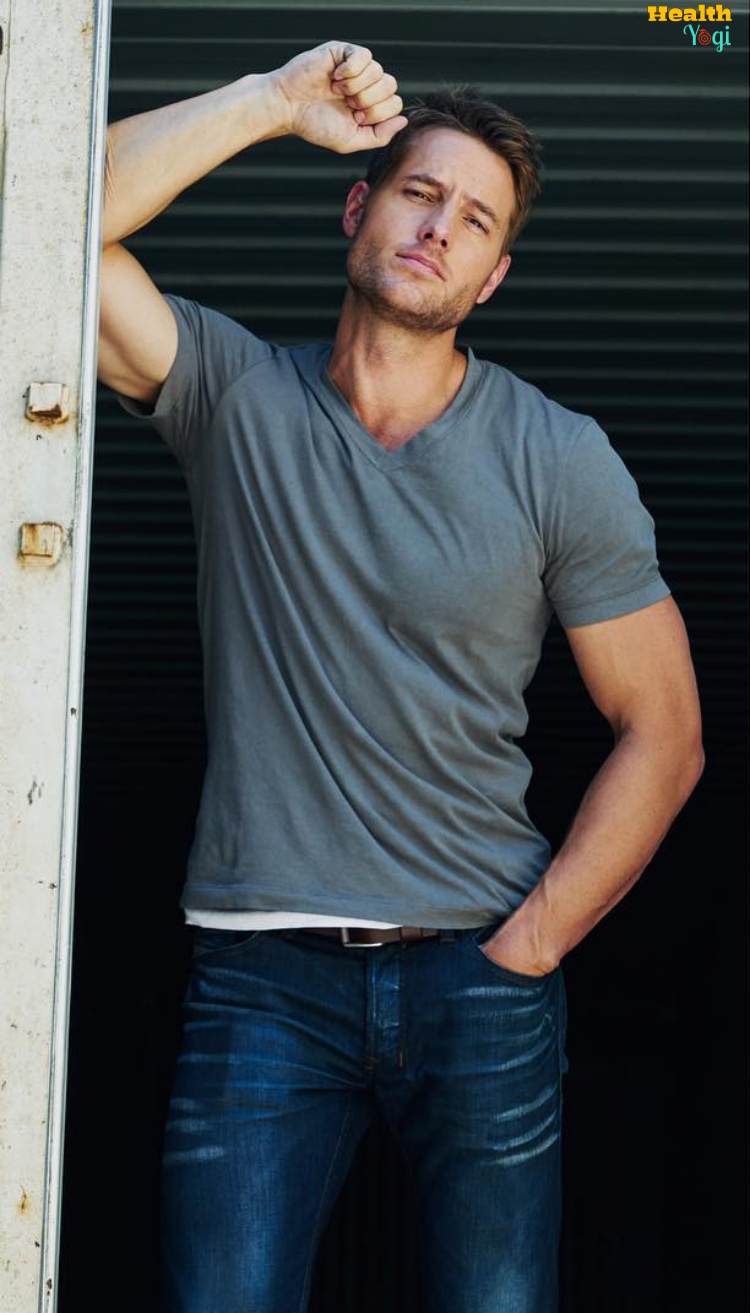 Here’s a look at his body Stats–

The Internet seems to already be obsessed with his physical stature and strength, which he doesn’t shy away from showcasing, as in

‘This is Us’. But the actor reveals that he works very hard to not embarrass himself on screen and has his own weaknesses, especially New York food.

Altogether, the actor is maintaining a great physique for quite some time now and we will also root out some tips for people in their 40s about fitness.

The most desirable body type today, among men, is that of lean toned muscles rather than bulking up. The actor resorts to strength training with flexible moves of martial arts like boxing.

This method is considered tried and tested in the fitness world. In an Interview for People.com, the actor said he does a lot of Weight Training. This Training can be done through bodyweight exercises like Plank, Pushups, Lunges, and Squats or by combining dumbbells with them. Justin prefers the latter. In an Instagram Post, the actor showed his insane training schedule where he held the plank position with loads of weight. The strength exuded, compelled people to call him a beast in admiration and awe. 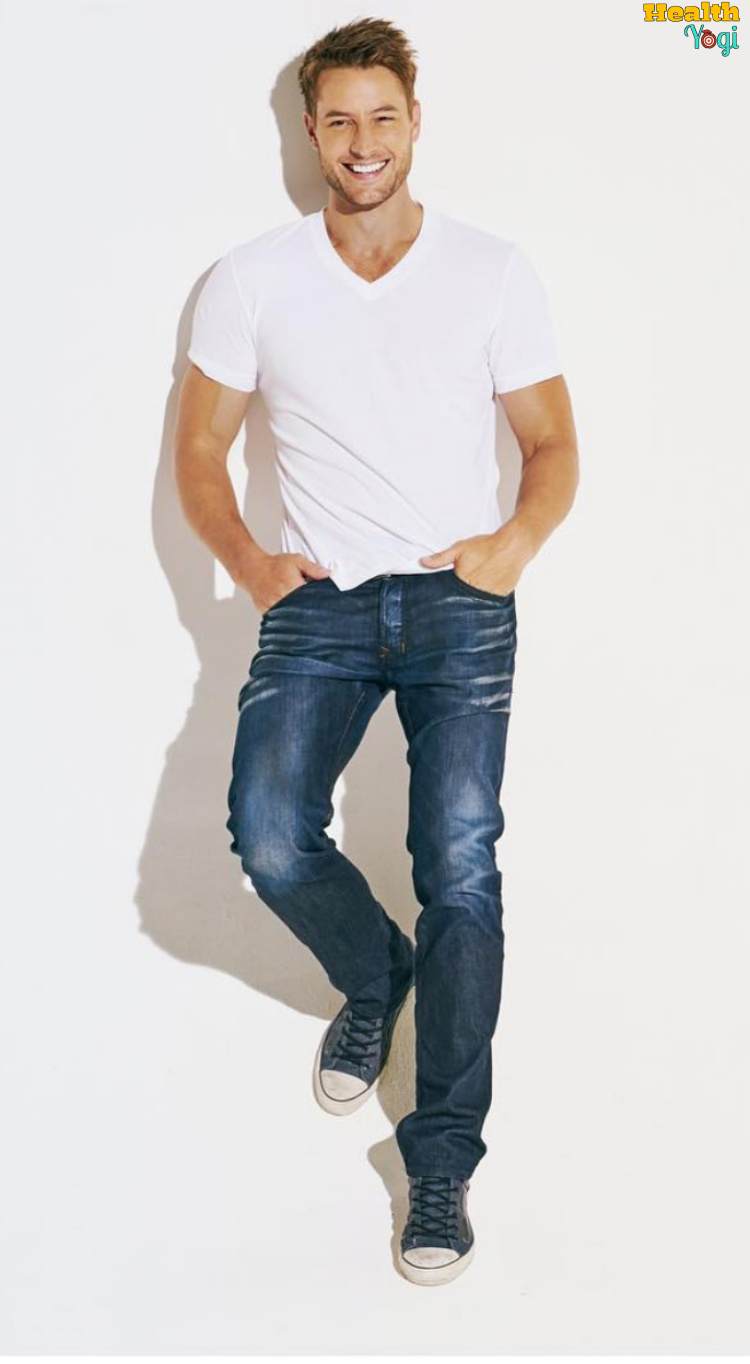 Boxing is another exercise that the actor subjects himself to on a regular basis. This gives lean muscles, flexibility, and cardio strength for the long term. The actor even did a movie named ‘The Challenger ‘ which was a boxing sports film.  boxing brings great definition to the body and builds complete strength. It gives you both mental and physical benefits.

The actor revealed that Pre Workout stretching and post-workout rest forms a major part of his fitness routine. He also revealed that injury prevention is always at his core focus while working out, especially due to his age. So he tries not to overtrain and maintain a balance. Thus he works out 4-6 days per week for 1 hour daily and focuses more on recovery and healing.

His rest and Recovery methods are quite elaborate. His recovery patterns include Compressions, Massages, and Cold Treatments along with rest. These help deal with delayed muscle soreness, swelling, and other forms of inflammation. Thus giving you quicker recovery and more flexibility in those areas, boosting overall athletic performance. Hartley relies on cold lasers too, to relieve muscle aches. Cold Laser Therapy is a quick and painless way of healing through relieving pain and inflammation of muscles.

The actor doesn’t have a specific goal altogether. He tries different goals at different times and thus keeps his whole body in a challenging mode. The actor also likes traveling and trekking, which are great ways of boosting both the mental and physical health of a person.

He does a lot of running on the treadmill and considers himself really good on the ground too.

The actor is particular about what he eats, but not fanatic. And in an interview with People, he said that he believed in sustainable fitness and not strict one.  This gives a person scope to make mistakes and learn from them to improve altogether without unnecessary self-judgment and criticism.

Though the actor is not too strict about what he eats, he always carries an awareness about what he puts inside the body. And that plays a pivotal role in long-term fitness. No fad diets can change your body, as simple awareness and discipline can. The actor likes grilling himself and often works with vegan options. 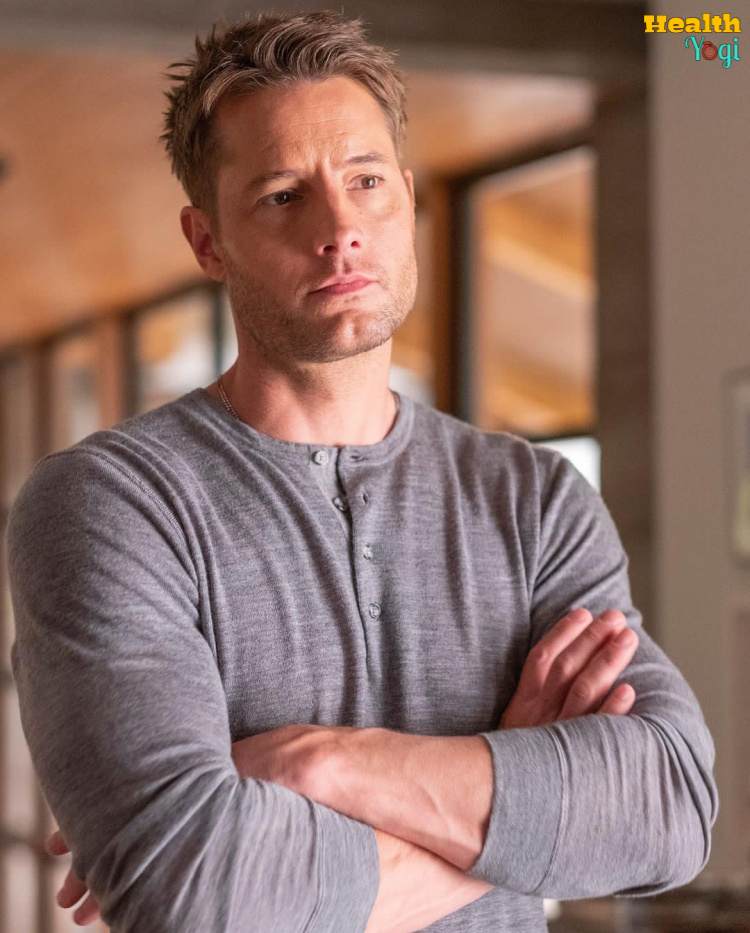 No, He is not Vegan.

The actor revealed that he tries to mostly follow a plant-based diet and loves vegan meals that have protein content. This he considers satiating and fueling.  Further, the actor strictly adheres to the very low salt content in his meals. Protein powder and Oatmeals are some of his healthy options that you can try.

The actor goes a little slow on his dietary commitments while on vacations, traveling or when in New York City. His favorite is Chicken Parmesan Pizza in NYC. Treating your tastebuds, once in a while is actually counterintuitively good for your long-term fitness. It has been suggested to be. helping with a metabolism that burns calories faster.