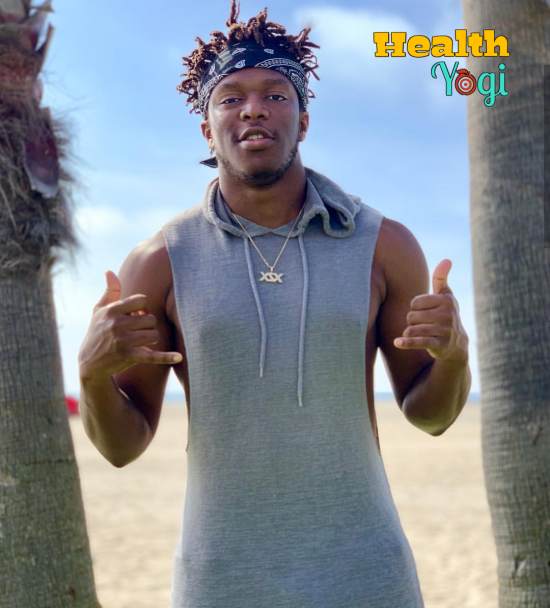 KSI Workout Routine and Diet Plan: KSI is a YouTuber, rapper, actor, and even a boxer. He has done many super hits songs and also founded the popular YouTube group the sideman. Although last year he is mostly known for something else and that is his boxing match with Logan Paul.

KSI’s body physique changed a lot after he started training for the official game. So if you also want to have a body just like KSI, then don’t worry; I got you covered. We are going to discuss all the KSI workout routines and diet plans.

KSI workout routine consists of doing a lot of different things, and it’s not easy at all. Even though he has no fight coming soon, he’s continuously training his boxing routine. KSI is also doing a lot of cardio and core workout with some strength training as well.

So basically, every day, KSI is working out for about two times a day, and in total, he workout two hours to three hours almost every day. There are a lot of videos that KSI has shared in his social media accounts that give a lot about what he usually does in his workout routine. 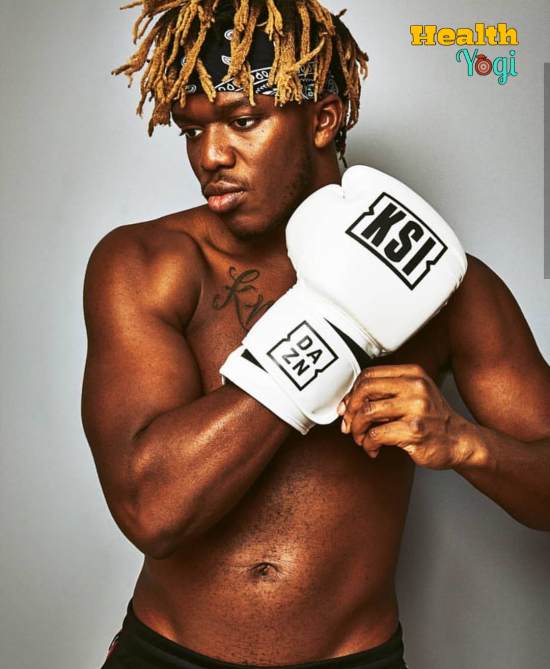 Once KSI posted in his story that his training starts with a few rounds of 800m runs. That is not what he does every day; it’s just a day of his weekly workout routine. KSI cardio workout mostly involves doing long term and short-run many times; he keeps switching them up to maintain his stamina and gain that quickness.

The cardio routine also consists of doing a minimum of 10 to 20 minutes of jump rope routine where he will work on his footwork. This exercise is an essential boxing exercise that you may have seen a lot of times, but it’s also super useful for your legs.

The core workout is also essential, especially when he was training for the match he used to teach his core every day. With exercises like scissor kicks, leg raises, crunches till failure, incline crunches, and crunches with ball throw.

Also, the conditioning crunches with the medicine ball. That is necessary as you take a lot of punches in your abdominal region while fighting in a boxing match.

Weight training is one of the routines that he has been doing for many years now. In this routine, KSI used to follow a standard bodybuilding routine, but after starting with boxing, KSI is more focused on making explosive moves, like dumbbell thrusters, deep squat, etc. This exercise gives you strength, provides you with that explosive power, and also shapes your body.

The boxing routine that KSI follows is not out; we do know some of the exercises that he follows, but not the whole workout routine. KSI boxing routine consists of doing sparring with his trainer for a while. KSI learned boxing in such a short period by just continuous training only; he used to train more than an average athlete.

At that time, he used to do many rounds of sparring, speed bag sparring, punching bag sparring, and other drills. The routine made by his coach kept getting changed according to KSI performance. KSI does his boxing routine at least four to six times a week.

This is all about KSI Workout Routine.

The diet plan of KSI is organized by his home chef in that he eats only healthy food as long as KSI Is in the house. The food is well balanced with vegetables and fruits. The Chef also maintains the perfect amount of Macron, glycaemic index, and calorie amount while preparing his meal.

The breakfast usually starts with whole-grain pancakes or waffles, with that KSI enjoys a cup of coffee and juice. Then in snacks, he’s eating fruit and protein smoothie, and in lunch, he usually goes with salmon or chicken with veggies and salad. KSI also consumes a lot of water throughout the day to keep himself fit and hydrated.

This is all about KSI diet plan.