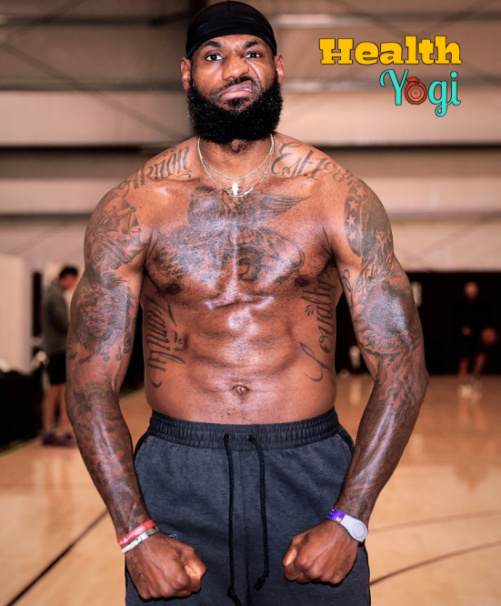 Lebron James Diet Plan: Lebron James is an NBA player know for playing Small/Power forward for the Los Angeles Lakers. Lebron’s career has been the one to watch; there is no doubt about it that he is definitely at the level of Kobe and Michael Jordan.

When you get to that level of playing, the pressure to keep it up and maintain the physique gets way too intense; however, it’s nothing that a beast like Lebron James can’t handle. Now, when you work out like a beast, and you need to eat like one, Lebron knows the best. So if you also want to know the Lebron James diet plan and the things that he eats, keep reading.

The G.O.A.T Lebron James is a beast when he works out; if you haven’t seen his routine that he follows, you should check the workout routine first to get the idea of how serious Lebron gets when it comes to being healthy and staying in his top shape. After all of that workout, anybody will log for a diet that can give back the calories he has burned. So let’s see how he recovers the energy and stays in shape with his diet.

After searching his diet plan, I found the Men’s Health article, where they have told all about how Lebron James maintains his diet and what he does to stay fit. It’s not that it’s some secret, as if you follow Lebron James on Instagram, you may have seen a lot of stories and posts that Lebron shares showing off the foods and workouts that he does.

However, Lebron diets also have different phases, like during the game season, pre-game training, post-season, etc. For example, I’m sure we all remember when Lebron was lean and losing weight, a lot of memes got made on how slim his body got. After a while, Lebron James himself shared a meme about his diet, and after a time, he talked openly about what he was eating to get lean.

Lebron stated that he left sugar, dairy, and any carbs and was just focusing on eating many types of meat, fish, veggies, and fruits the whole day for 67 days straight. During that time, James shared his two favorite meals, which were:

When Lebron James is training, his diet is different. When James is playing a lot of games and practicing a lot, the carbs amount get high in his diet.

James also stated that he eats a lot of carbs before the competition as well, as when you are running for 50 to 60 minutes straight in the game, you burn a lot of calories, which is why before the match, he eats like either chicken breast and pasta or salad and nuts. When he is about to play the game, Lebron takes a protein shake and fruits before playing.

Later on, Lebron also stated that he’s following the example of Michael Phelps, who is a swimmer known for his massive diet during training. James noted that he couldn’t do that before the game, so he waits for the game to finish, and after that, it’s time to eat as much as he wants. The meals contain things like eggs, pancakes, veggies, oats, chicken, rice, etc. Most of the foods have lots of carbs in them.

Lebron James likes to grab a pizza at his Blaze Pizza franchise in the cheat meals, and Lebron also wants to drink a lot of wine. Wine is one of James’s things almost every day, but Lebron let himself loose on cheat days. So yeah, that’s pretty much all about his diet plan.

That’s all for the Lebron James diet plan.