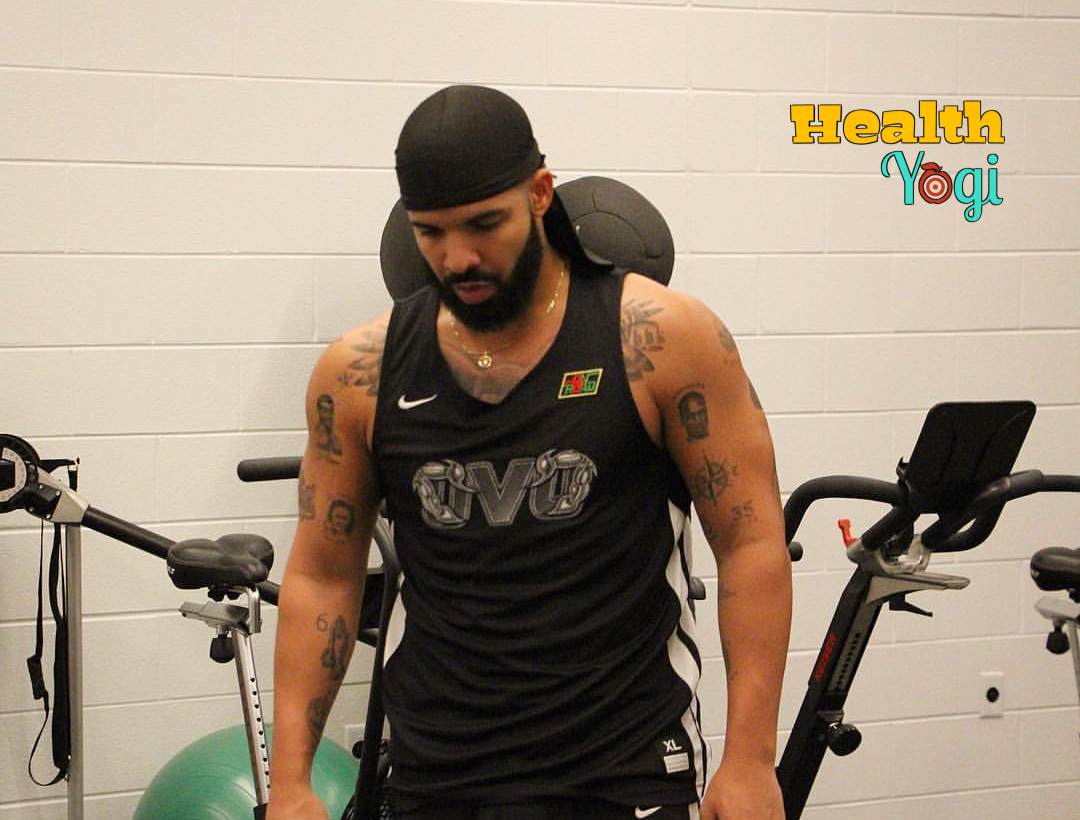 Drake Workout Routine and Diet Plan: Drake is an amazing singer and songwriter as some would say while others call him a singer with average voice and talent who hires other songwriters to write his songs. There is always hate and love for Drake, girls dig him while many guys and even girls hate him for him being like that. 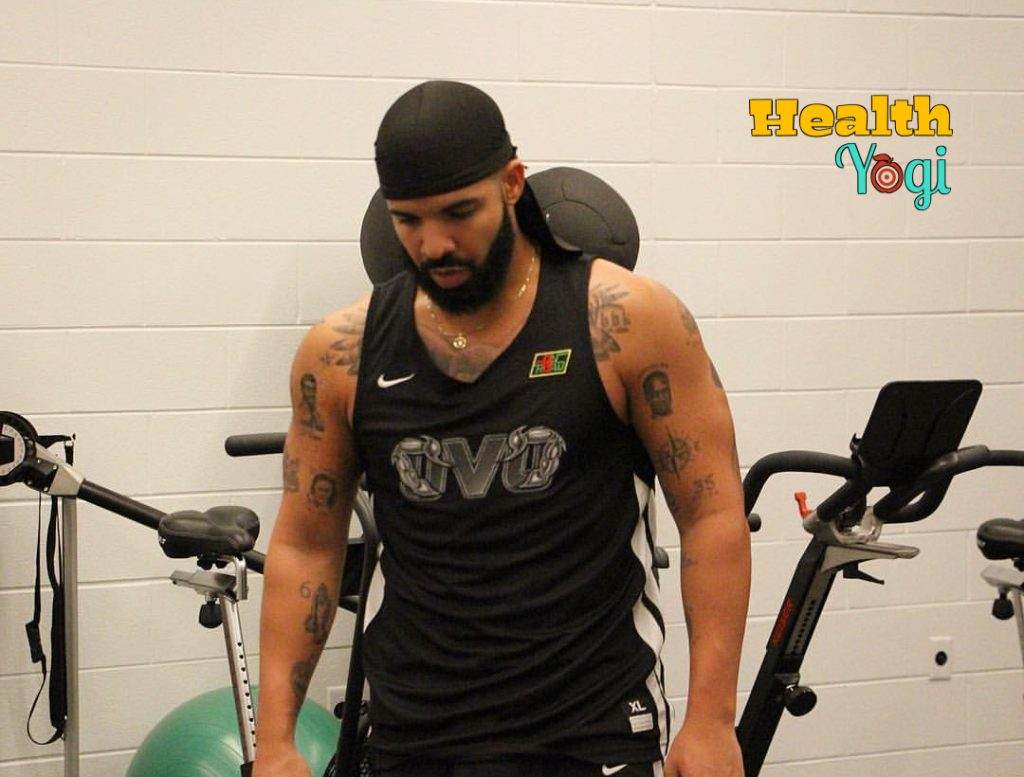 For sure Drake has his own fan following but you can say many artists don’t like him and his music. Although it’s not about his music today, it’s about the recent pics that he has been posting with abs and a great body. Well while some were saying its Photoshop and others were saying he got them by surgery. The long story short is that he has those abs for real and he is working out. So let’s see what exactly he eats and do to get them.

In this article, we focused on Drake Workout Routine and Drake Diet Plan and Drake Body Stats. 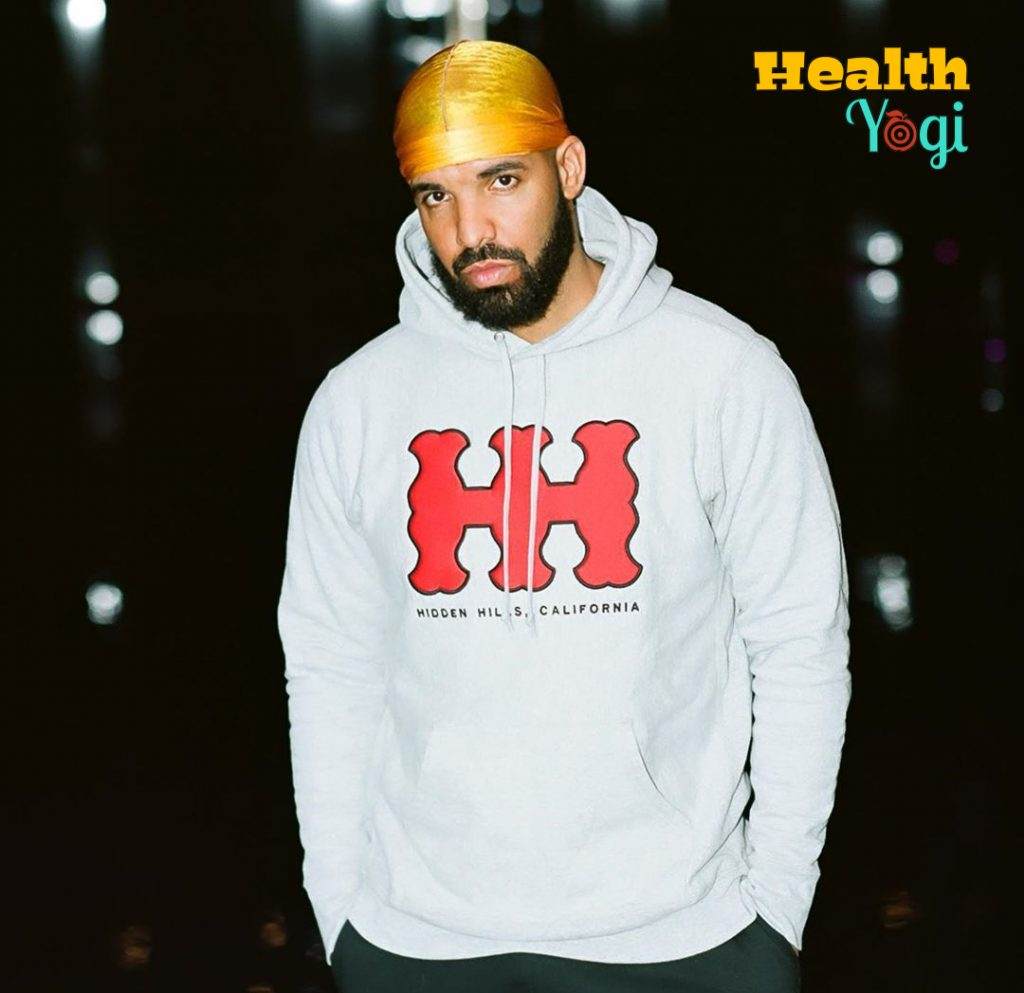 The workout routine of Drake is not my favorite one, because of what I have found out that he doesn’t really work on his legs much and I really don’t like that. He does have a leg day but the leg day is not as good as other days. 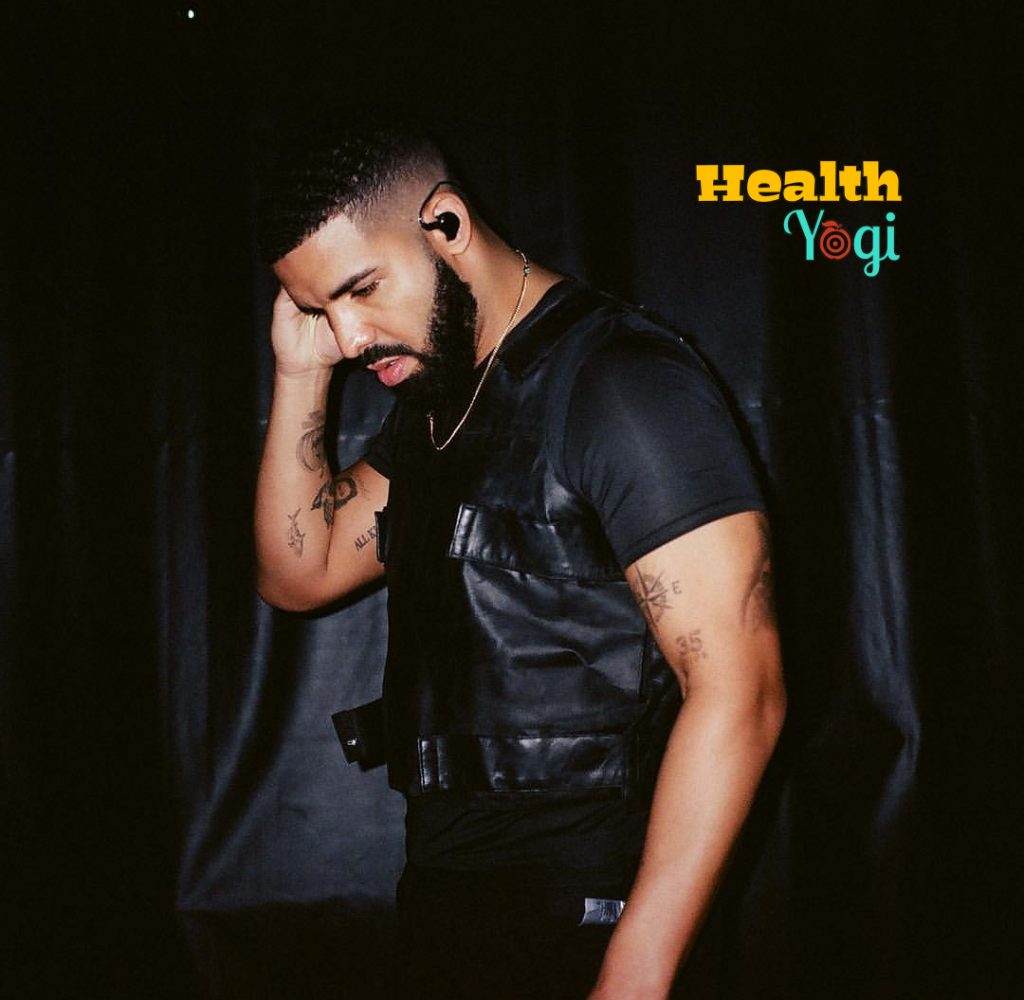 According to his trainer, his burpees are not good and he doesn’t like to do them. While he did say that drake is up for anything other than burpees. Which is okay I would say that everyone has one thing they don’t like to do in the gym. Mine is one arm Dumbbell rows that I don’t really like to do.

Drake focuses on doing push-ups, pull-ups for a warm-up and then goes hit the bench press in the smith machine. Yep I know it’s not what everyone does but he likes to do on a smith machine. Later he goes incline press and then Declines Dumbbell press. After that, he works on his cross cable flyes. That’s all I can get so yeah. He does 3 to 4 sets of 10 to 15 reps.

This surprised me when his trainer said he can muscle up. I would never imagine drake doing a muscle-up, but apparently he does it. His back workout consists of many different exercises like pull-ups, lat pulldowns, v rows, dumbbell rows, deadlift. He is a fan of deadlifts as he posts a lot of videos doing it. The exercise of the back also goes in the 3 to 4 sets with 10 to 15 reps.

The shoulder day he does, military press, dumbbell press, shrugs, side lateral raises, front rows, and cable lateral raises. Again 3 to 4 sets with 10 to 15 reps. The shoulder day is not confirmed as he didn’t disclose much of that and his trainer kept the routine hidden even now we don’t know surely what he does. More about Drake exercise routine is given below.

He loves to do biceps curls and barbell curls and keep posting them a lot. Bicep routine of Drake is biceps curls, barbell curls, preacher curls, cable curls, hammer curls. Tricep is skull crusher, dumbbell kickback, pulley pushdowns, dips. He does 3 to 4 sets with 10 to 15 reps here too.

Here, legs are less but and he works on maybe that’s why he showed results in his abs more than anything. The legs go with squats, leg press, leg extensions, hamstring curls, calf raise. He likes to do deadlift on the leg and core day. After that and he works more and this is not really legit thing we know it’s just some exercise that he does and others he may be doing. Crunches, leg raises, cross crunches( bicycle crunches), v hold, plank, hanging leg raises. He does 3 to 4 sets of 10 to 15 reps here. 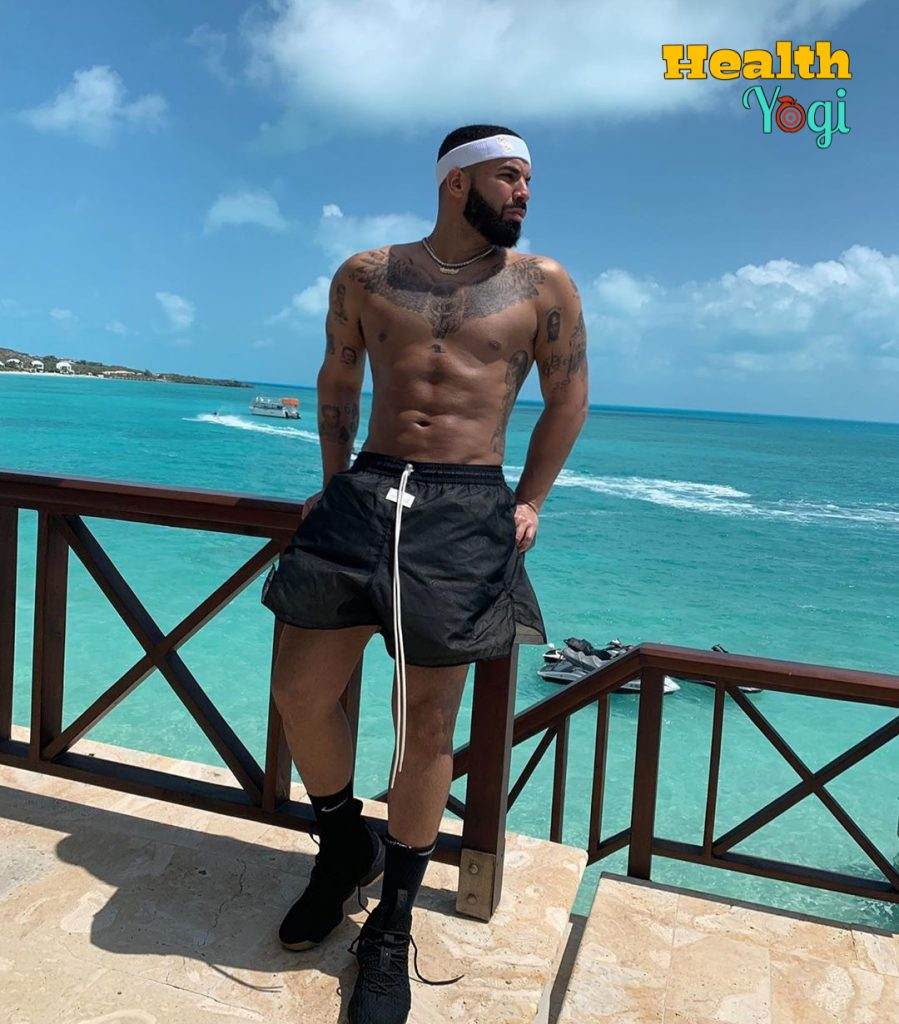 This is all about Drake workout routine.

Now, this is still a mystery. There is no legit thing about his diet plan. All we find out is that he eats more protein food and fewer carbs. 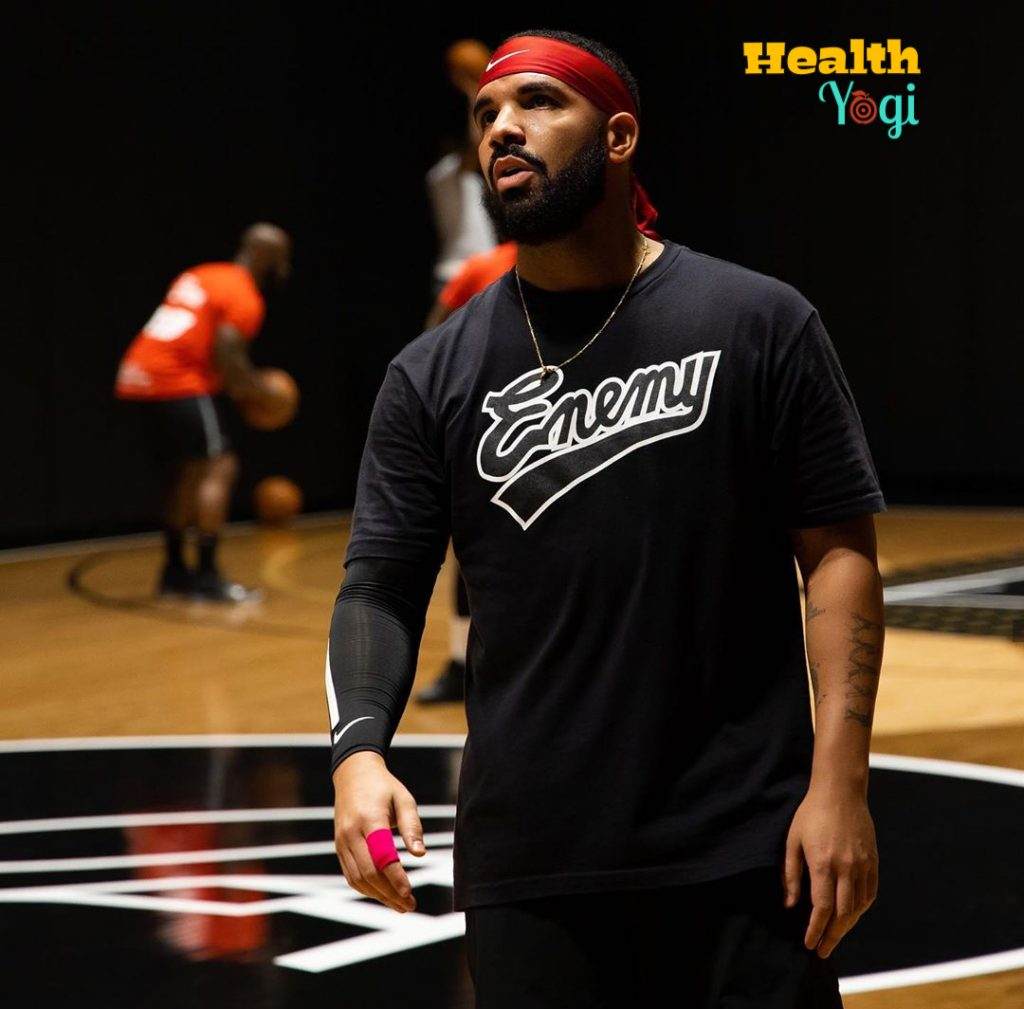 This is all about the diet plan of Drake.