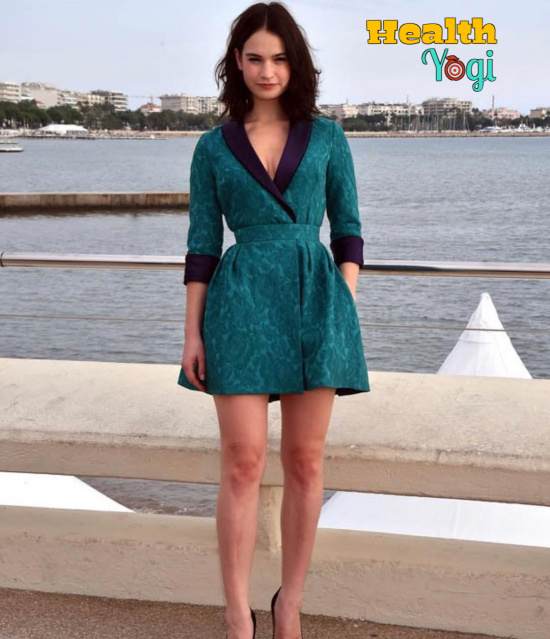 Lily James Workout Routine and Diet Plan: Lily James is an award-winning actress and a  model known for the roles that she has played in movies and TV shows like; Cinderella, Mamma Mia!, Baby Driver, Yesterday, Downton Abbey, etc. You will also see Lily in her upcoming movie Rebecca soon.

Lily James, also gets known for her incredible fitness, which she has maintained and shown in many of her films; many fans want to know-how Lily keeps her body in shape. So for all of you guys, I will talk about the Lily James workout and diet plan.

Lily James is an actress that has done different kinds of roles in her acting career; some of them required intense training while some were challenging for her in body transformation. All of these years of staying fit by doing different things for her acting career and fitness lifestyle has given Lily a quite formidable physique that makes her look incredible.

Lily James talks about fitness and a healthy lifestyle in many of the interviews; Lily has done so many things: cycling, yoga, pilates, boxing, gym training, bodyweight exercises, etc. So there is no shortcut or simple way to achieve the level of fitness that Lily James has achieved.

However, after researching for quite a bit in Google and reading many of Lily James’ interviews, I have noticed that yoga and pilates are essential parts of Lily James’ workout routine. 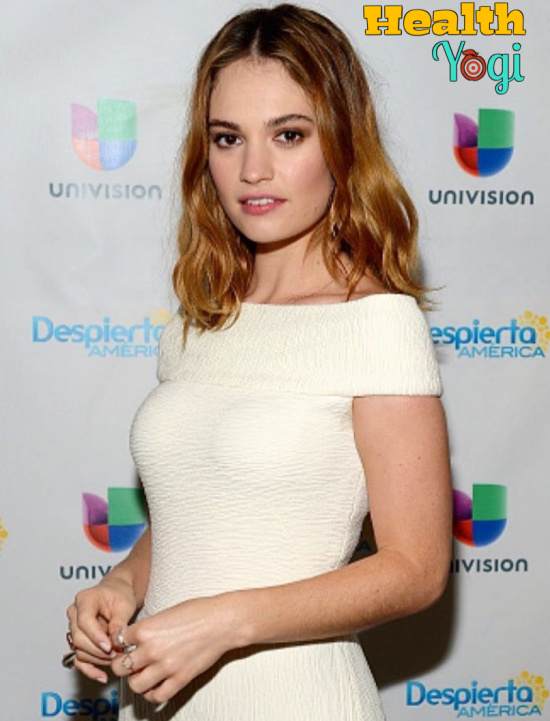 Lily also talks about these things in her recent interview with Shape magazine, where she was also on its cover page. Lily stated that during the times of pandemic and staying home, I had done a lot of exercises. Lily also said that when she regularly works, she starts to eat well on her own and stop drinking wines and other things. Plus, the energy is so good that Lily is always ready to work out the next morning.

Lily also stated that you need to enjoy your workout; Lily said she had switched some of her activities to different exercises like doing a lot of yoga and pilates classes. Now that she is at home, Lily James has started doing dance workouts. She even said that her neighbor came and told her that you played the same song for three and a  half hours.

Lily also stated that she has started doing cycling again, so yeah, that’s great! Lily James used to do a lot of cycling when she was in London and until her bike got stolen. However, she has brought her bike back now and is enjoying her time cycling around the city.

In the end, Lily James says, do accept days off while working out and be okay with it. Sometimes even she gets tangled in some other work and then skips a workout, so it’s okay to forget sometimes.

That’s all for the Lily James workout routine.

Later in the same interview, Lily talks about the food and diet that she takes. Lily talks about how she started cooking all the time for herself and trying different recipes from vegetables. However, Lily also states that there were times when Lily James was so lazy that Lily couldn’t cook and ended up ordering pizza three times a week.

So Lily James doesn’t take much pressure now when it comes to food; Lily balances the meal and eats what she wants to eat. There is always a balance that you need to keep, and when you can keep that balance in your diet, you can enjoy some of the foods and stay fit like Lily. Lily James also drinks a lot of water in her everyday life to keep her skin healthy and clean her body from inside.

That’s all for the Lily James diet plan.